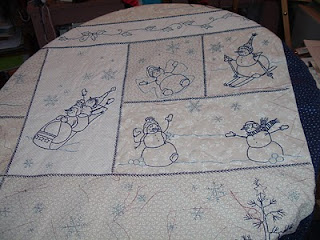 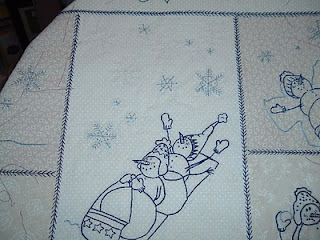 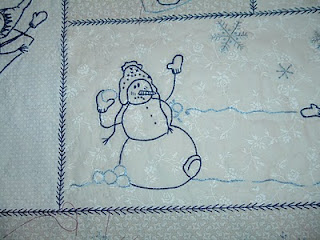 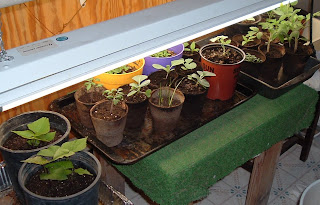 Started hand quilting the Bluework Snowman Quilt. The first two blocks are completed and it is hard to see the hand quilting white thread on white background. Perhaps it will show up more on the darker background. I am not quilting traditionally instead of straight lines there are a lot of swirls and the hand quilted snowflakes are done with a fly stitch. It is a year project as I only hand quilt about an hour per day.
My plants will soon be leaving for the green house. I have two sweet potato plants in the lower left corner. A few cherry tomatoes, celebrity tomatoes, cabbage, broccoli, basil and rosemary. DH planted over 100 Vidalia and TX sweet Onions. Why so many? I have no idea. The apricot tree is in flower and the temp this am 25. Probably no apricots again this year but it is a nice tree for shade.

Posted by Quayceetatter at 8:35 AM No comments: Links to this post 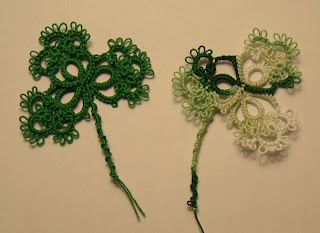 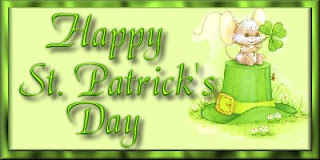 Betsy Evans posted this special gift on the HBT Yahoo Mail. Thank you Betsy!!
The dark green Shamrock is Flora 20 and the variegated is Lizbeth 20 Christmas Green Mix.
Visit Jacquie Lawson Irish Jig ....
http://www.jacquielawson.com/viewcard.asp?code=2234147203408&siyrce=j1000
Have a great, Green, Day!!
Posted by Quayceetatter at 3:37 PM No comments: Links to this post 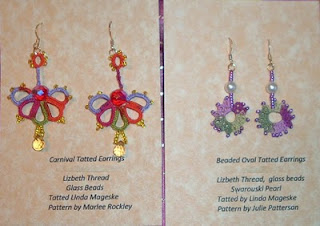 I tatted these earrings for an Art Show this past weekend. The Carnival Tatted Earrings tatted up very quickly and the pattern is from Marlee Rockley, http://yarnplayertats.blogspot.com. However, teardrop beads cannot be found at Hobby Lobby or JoAnns so I had to order from Fire Mountain. Fire Mountain is a very good bead company but you have to plan a head.

The Beaded Oval Tatted Earrings from Julie Patterson I had to alter it some. I used size 40 Lizbeth thread and it had too many rings for the size of thread to pull through the SCMR. The first ring broke and a second ring the wire for the beads cut it a part. Instead of the wire for the top part, I used the end of the tread from the SCMR. Used a bead needle and thread it through the beads around a jump ring and back down. Tied both threads and hid them on both sides of the tatting. I was very pleased with the outcome of both patterns.
Posted by Quayceetatter at 6:03 AM No comments: Links to this post 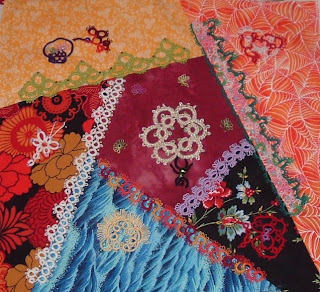 My Block for the Palmetto Fund Raising Quilt is finished. Jon's beaded dragonfly put the finishing touch on the block. Her Heart pattern is on the other side. The basket of flowers are from a Dover Tatting Book and the humming bird is a pattern from Karey Solomon's, Tatting Times. Mr. Hedgehog is a pattern from Nancy Tracy and the butterfly from Sherry Pence. The center medallion is from Patti Duff's Tatting Motifs. The spider is made with beads and chains for the legs. The purple edging is my own design with split rings and chains. The edging above is from the book, Traditional Tatting Patterns edited by Rita Weiss, tatted with Star No. 80 Thread. It was an easy pattern but you did have to pay attention, no distractions! The top was tatted first and then connected to the bottom while tatting. The beads on the edgings were added when sewing it to the block. It is going to be a beautiful quilt/wallhanging when completed.

Posted by Quayceetatter at 8:59 AM 4 comments: Links to this post 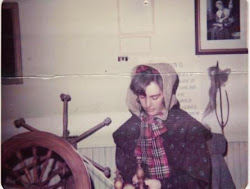 Quayceetatter
I love all types of Victorian Needle work, Weaving, Spinning, Gardening, my Dogs and a Red Hatter with a Hattitude!